The Portland Preservation Foundation, a 501c3 nonprofit, has a goal to bring back the Temple Theatre to Portland and once again provide a venue for movies, a stage for live theatre, musical performances, and other entertainment for the citizens of Portland and the surrounding areas.

The following information is taken from a article by E.A. Green published in Portland Leader August 16, 1995.

The first "picture show" building in Portland was located on the south side of Main Street, near the present day El Azteca Mexican Restaurant, in 1914 or 1915. The operators of this theatre are unknown. It had a nice screen, one projector and some chairs for seats. Silent movies were shown using a D.C. generator for power. This theatre operated for only a brief time.

The next theatre was located on the north side of Main Street upstairs over the second Farmers Bank building. Paul Moore, Polk Moore and a Mr. Pruett ran this theatre. It used a D.C. generator with one projector. They later got a second projector. The hall was large enough to hold approximately 100 chairs. They use a player piano with their picture shows that was pumped by a Mr. McNeely during the movies. Charlie Green, and other young boys, cleaned up the theatre after the show. This theatre hall was also used for speaking engagements and other programs. It became known as the Portland Theatre Company. In January 1922, the Portland area Masons bought the hall. This ended the picture show business for the Portland Theatre Company.

In 1922, moving pictures took a turn when the Hayes Commission was established. The purpose of the commission was to censor motion pictures.

The Strand Theatre building was built in 1922 or 1923 by Paul McGlothlin and Charlie Hendrix. In 1925, Hendrix brought out McGlothlin. The Strand was located on the corner of Broadway and Market, where the Sumner Employment Exchange is today. This building had sawdust in the walls to improve the acoustical sound. To advertise upcoming shows, Hendrix would use a megaphone and carry a sign out in front of the theatre. Attendance was good at the Strand Theatre.. In 1928, “talking pictures” started. These movies had a record that ran with the projector. This system was called Vitaphone. Later, the sound was directly on the film. Charlie Green, J.P. Meador and William Derryberry worked the projection booth. Mrs. Verdie Hendrix sold the tickets. This theatre went out of business in the late 1930’s. Urban renewal took down the Strand Building in 1971.

The Capitol Theatre was in operation by 1936. It was located on Russell Street until it was destroyed by fire around 1937.

The Temple Theatre, owned by Walter Moore and Charlie Green, began operation in 1937. The Temple Theatre opened in a new brick building that had been built to replace the old Capitol Theatre that had been destroyed by fire. This is the same building that last was the home of Morris Glass Company. It was a nice theatre with auditorium seating. Duncan Empson, Robert Cummings and Rhea Hinton were projectionists. Mrs. Jeanette Moore Johns, in between her college semester, kept the books for the Temple Theatre. The first Temple Theatre building burned. It was rebuilt and put back in operation. The Temple Theatre was reported to be one of the best small town theatres in the state in 1939. With both ladies and gents restrooms and a water fountain kept ice cold by electric refrigeration, it had the latest and most modern equipment. It was also air-conditioned for the patrons’ comfort. Contracts with Fox, MBM, Warner, Paramount, Columbia, and Republic provided all the latest movies every night of the week except Wednesday and Sunday.  Some nights would include two separate shows. From time to time various stage acts were presented by stars from the grand Old Opry and other radio personalities. Green sold out his interest to Moore in the early ‘40s. The Temple was in operation until the mid 1940's when the name was changed from Temple to Strand. During World War II, newsletter announcements at the theater brought updates from the battlefields and soldiers enjoyed movies when the stage was open on Sunday afternoons. The Strand was in business through the early 1950's according to the theater’s history from foundation archives. 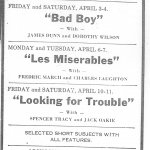 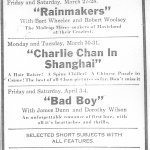